4 RPG Card Games You Have to Try

4 RPG Card Games You Have to Try

There’s a special magic to role-playing card games—RPG card games—even in a gaming world that has never been richer in options.

For one thing, RPG card games are social: you can enjoy a cooperative or competitive party game where everyone sits around a table instead of a screen.

Of course, RPG card games are the perfect party game because they don’t require the long, open-ended time commitments of games like D&D and Pathfinder.

With this in mind, here are 4 RPG card games for your next party or get-together. 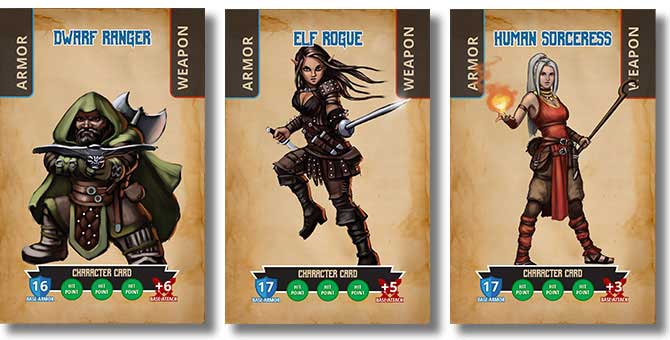 If you want to try your hand at fantasy-themed RPG card games, RPG Battles is a roleplaying-flavored card game with a particularly accessible and engaging set of game mechanics.

Players become fantasy characters—the Fighter, Sorceress, or Monk, for example—and draw cards to collect treasure, magic, and weapons. But beware, because the deck also contains monsters, such as Bugbears and Crypt Things, and you’ll need good cards and perhaps a favorable roll of the dice to beat them.

What makes this game particularly fun is the addition of cards that provide special abilities that riff off the card deck mechanic: there are cards that allow you to skip your turn (useful for forcing the next player to fight a monster), steal cards from other players, and look into the future, i.e. the deck.

RPG Battles has been reviewed on YouTube by Unfiltered Gamer and Better Half Reviews. You can even play the game online for free here.

There’s a new and exciting trend toward rules-light RPGs, and the Tarot-based Royal Blood RPG is a wonderful example.

In Royal Blood, players become the human characters in a deck of Tarot cards—the Princess of Wands, the Knight of Pentacles, the Queen of Wands, and so on. In the game, these are called Royals, considered “half-magic, half-human.”

The Royals are opposed by the Arcane, e.g. Death, The Hanged Man, The Devil, The Lovers, The Star, “reality-bending monsters that wear human skin like a suit.”

Your object as a Royal is to carry out a heist in which you will corner one of the Arcane and take their power.

All you need to play the game is the rules booklet, available both as a physical softcover and in digital form, and then a deck of Tarot cards and a few coins.

Zombies are a recurring staple in popular culture, a modern myth that may go through cycles of waning and waxing popularity but never really seems to die.

Enter Zombie World, the perfect RPG card game for experiencing the zombie apocalypse. Players find themselves fighting both the living and the “restless dead,” using a 110-card set that includes Advantages, Population, and Enclaves.

There are also Pasts, Presents, and Traumas, a Survivor Deck, a Bite Deck, and a Fate Deck.

The Core Box comes with the 36-page rulebook, an enclave playmat, a Gamemaster playmat, and then playmats for characters and basic moves. The game is designed for easy, quick, and intense play—perfect for experiencing the zombie apocalypse.

If you enjoy fantasy-themed RPGs, dungeon crawl and cooperative board games, Gloomhaven may earn a special place in your heart. Designer Isaac Childres created it from one of his best Dungeons & Dragons campaigns, producing a game with something of the feel of D&D but with simpler mechanics and no need for a dungeon master.

Players become fantasy characters in an open world, and make use of a unique action card system to handle combat. Most cards have an attack function and a support or movement function.

If you’re looking for a party board game that captures the magic of D&D, Gloomhaven has you covered.